I have already indicated that there are apparently certain events where someone who is infected without even knowing it, infects a lot of others at once. While the image given so far is that these are “super spreaders”, i.e. persons who, for one reason or another, infect many others, I think that these events are occasions where the conditions of super spreading are optimal. I call them “super spread events”.   Many events have been identified worldwide. All in the course of February. For example, a church meeting in Korea, an Islamic multi-day event in Malaysia, a Christian multi-day event in France and Mardi Gras in New Orleans.

These have for example been church services, choir rehearsals, or events around football matches. It seems, that where many people sing or talk in an enclosed space, one infected person can be responsible for the contamination of many by the emission of infected micro-drops. And under unfavorable conditions (poor ventilation and low humidity) these micro-drops remain floating for a long time.

In Brabant-Limburg (The Netherlands) Carnival seems to have been a super spread event where many people got infected at the same time. (I don’t think so much outside during a parade, but just inside cafes and other festivities). If you look at the graph of the Netherlands of the number of deceased you see that Limburg and Brabant had to suffer significantly more deaths per inhabitant than the other provinces. 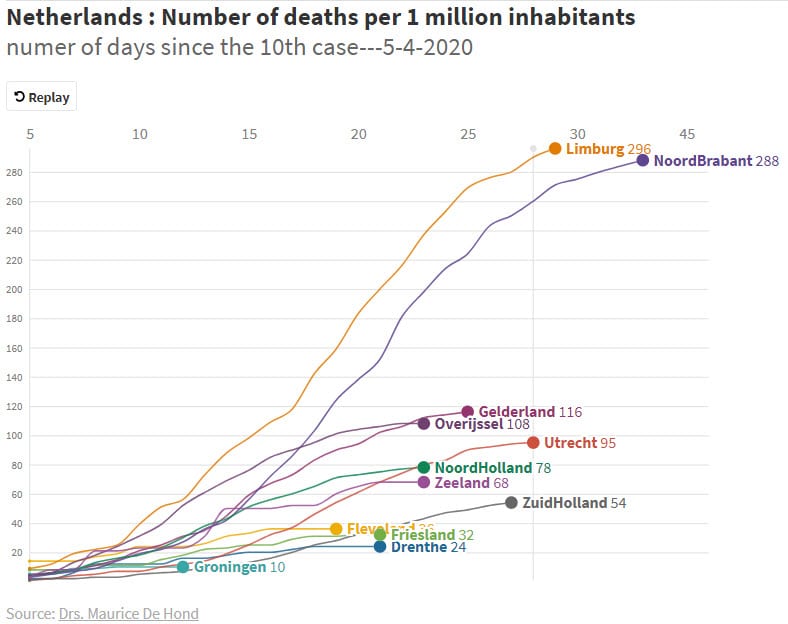 A similar graph can also be made for Italy. 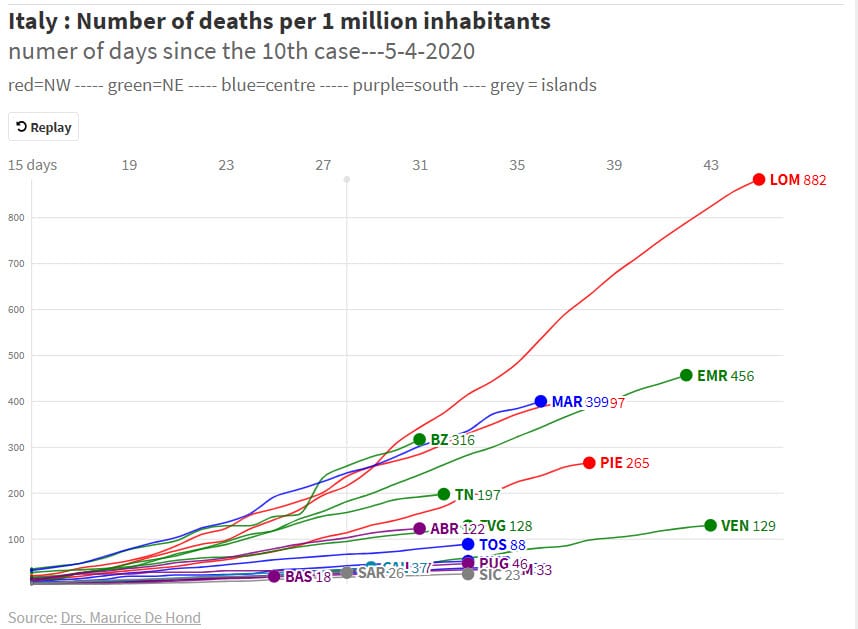 In this graph I show a number of Italian regions and Dutch provinces until the 36th day after the 10th infection in that province. 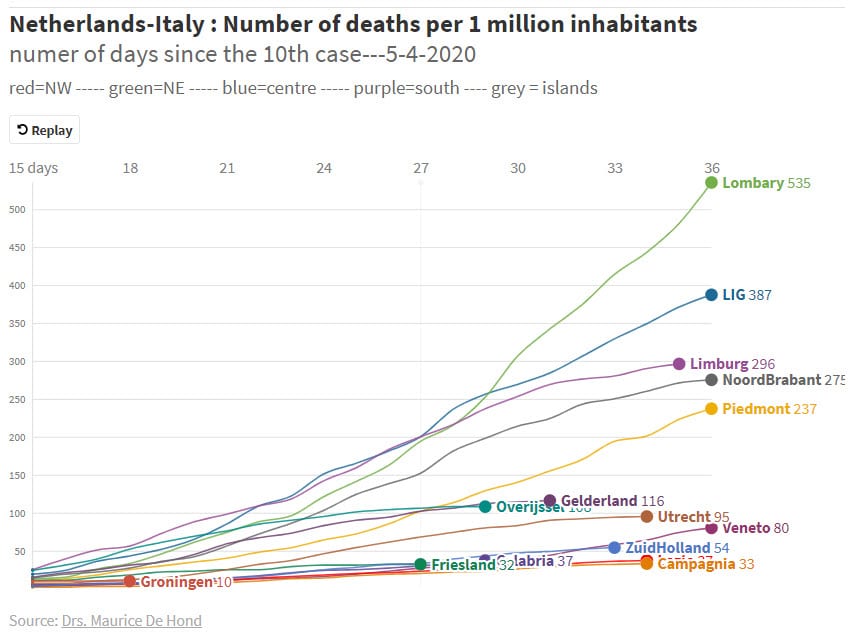 But if you look at Lombardy, you have to realize that the province has 10 million inhabitants and the source of the wildfire was in the three regions around the town of Bergamo.  Half of the cases emerged there, although that city/region only counts for a quarter of the inhabitants of Lombardy. So the death toll per inhabitant in that area is about twice as high as shown on this graph. Also in Brabant and Limburg there is a considerable difference by part of the province, as this map shows the number of deceased persons per 100,000 inhabitants. (You can also see the Dutch Bible belt in this chart. The diagonal from Goeree-Overflakkee to Staphorst. The super spread-events there have been the church services like the “afternoon for the crop” of March 11th). 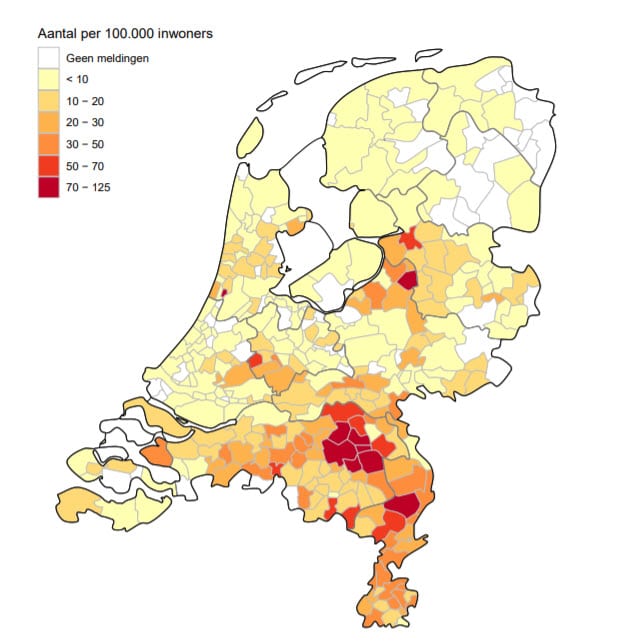 But of all the super spread events in Europe, the Atalanta Bergamo – Valencia soccer match must have been the biggest. (Partly due to the fact that that area around Bergamo is such a clear “frontrunner”).

To understand how such a super spread event works and what the consequences are, I zoom in on that race. It took place in Milan on the 19th of February.

I suspect that the spread actually took place in the stadium (in open air), but also in venues where large groups gathered in relation to the match. For example, the large numbers of supporters who went to Milan from Bergamo – often by coach – and celebrated before and after the match, and the groups of people who watched the match together in indoor venues like bars etc. around Bergamo. That evening the specific humidity in that area was also around 4.5 g/kg.

Figures including some assumptions from the Bergamo region give an impression of what may have happened then. They clearly illustrate how much impact these meetings have on the spread of COVID-19. Here the specific figures from the provinces within the Lombardy region, three of which are around Bergamo.

The first cases of COVID-19 were recognized around 15 February. The clothing and footwear industry in Italy has largely fallen into Chinese hands, so it could just be that these infections arose after Chinese New Year on 25 January. In the first half of February people undoubtedly returned from China, some of them carrying the virus.

On the basis of that conversion, there must have been about 3,000 infected persons in the Bergamo region by 19 February. That is 1,500 per 1 million inhabitants.

If we now count the deaths in that area from 2 to 4 weeks after the match, then one week after the match there must have been around 60,000 infected persons in that region.

Without this super spread event, the number of infected persons would have risen from 3,000 to around 12,500 in a week based on the normal R0 (reproduction factor) for this virus. But it would have been almost 50,000 more.

Let’s assume that 250,000 people in larger groups watched the match in the stadium and indoor venues like bars etc. On the basis of those 1,500 per 1 million, almost 400 of them would have been infected. On the afternoon and evening of the match they infected 50,000 other people, an average of 125 per person!

In the province of Lodi, heavy measures have already been taken at the end of February. In the province of Bergamo that happened on March 8th. The effect of this can be clearly seen on the graph below, reflecting the established cases. The actual number must have been at least 50 times higher around March 3. 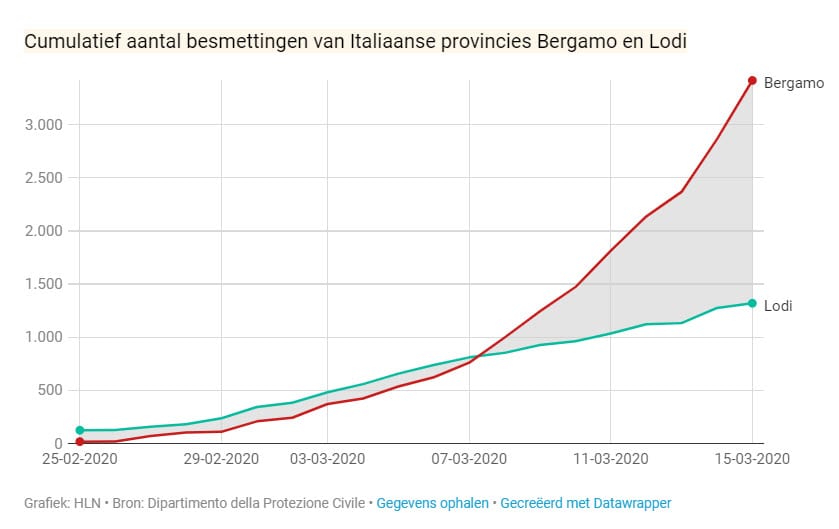 Around 20 March, the new number of deaths in Lombardy (including Milan) peaked at over 500 per day. After that it remained stable for a while and now we see a decreasing trend with about 300 deaths per day.

This numerical effect – despite the necessary assumptions – gives a good impression of both the effect of super spread events accelerating the speed of the spread, and the impact of harsh measures to contain the virus.

At the same time, it teaches us that if we do not organize these kinds of events for the time being (i.e. no church gatherings either), then the R0 (the spread factor) alone will quickly fall further.

The biggest challenge will be to slowly start normalizing society (with the new normal) on the one hand, and on the other hand to see how we can also organize meetings where many people are present.

More knowledge about this will be able to ensure a balanced approach. The risk of a super spread event in the open air may turn out to be small. And it might be advisable to only hold indoor meetings with mouth protection and/or increased humidity. Prof. Streeck’s research in Heinsburg is very important in this respect.

With regard to the approach to the exit policy, these are very important questions to answer quickly.