Home » COVID-19 english » What will happen to the spread rate of COVID-19 in (sub-)tropical areas?

What will happen to the spread rate of COVID-19 in (sub-)tropical areas?

What will happen to the spread rate of COVID-19 in (sub-)tropical areas? Lees verder »

Research from 2013 concerning the seasonal sensitivity of the influenza virus saw a marked shift in patterns between areas above the 25th Latitude toward the Pole (including the southern hemisphere), and the areas between the equator and the 10th Latitude.

In the areas above the 25th Latitude a clear pattern arises, showing peak influenza numbers in winter (explained by low air humidity). In areas close to equator a peak is seen when air humidity is at its highest and when it rains the most (such as during Monsoon season).

As of yet, there is no explanation why influenza thrives most in areas with high temperature (close to 37 degrees) when there is high humidity, while the virus seems to thrive most in lower temperature areas when there is low air humidity. It could be that hot conditions with high rainfall drive people into their homes and closer together, allowing for a higher rate of infection.

Whatever the case may be, the question is whether the COVID-19 virus will also show similar behavior in tropical areas. The first signs pointing to this being the case deserve closer scrutiny.

In Ecuador (close to the equator) we currently see a death toll of 34. But Malaysia may be the most interesting country to follow. On one hand, Malaysia implemented restrictive measures in an early phase of the outbreak. On the other hand, for the past two weeks Malaysia is seeing a substantial outbreak.

This can be explained in large part by an islamic religious gathering occurring in the Seri Petaling Mosque between February 27th and March 3rd. Around 16.000 people gathered closely together in a religious festival for several days. 1.500 of these people where foreigners, hailing from over 25 different countries.

The Star newspaper is a great source to follow developments in this country, because Malaysia is performing a high number of tests and is also diligently tracking the contacts of persons confirmed to have the virus.

Currently, about 10.000 visitors to the religious festival have been tested and it looks like 15 to 20 percent of these were infected in the 6 days of the festival. Now, we can’t be completely sure whether every attendee was in actual contact with the infected, so these percentages at most show the minimum number of infections.

There is also another number that stands out. As of this moment, only 13 deaths have been linked to people infected during this religious gathering. This is in spite of the fact that we already know that it’s likely a lot more people have been infected than the initial 1,200 that received positive test results. It seems that the mortality rate for those infected there will not reach 1%.

As of yet, we don’t know the age composition of the attendees of the event. It’s difficult to deduce this from photographs. 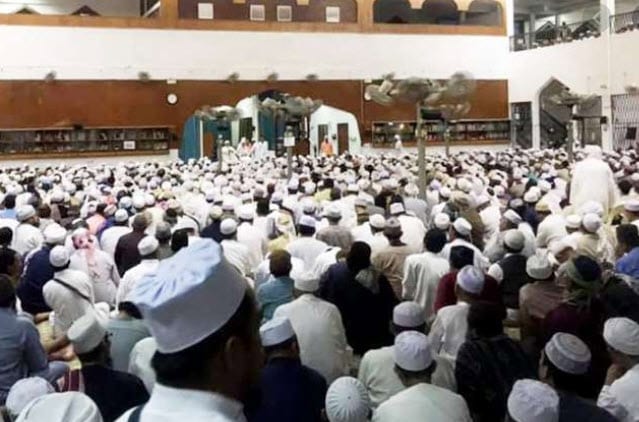 After the festival, infected worshippers have continued to infect others, while the current death toll in Malaysia amounts to (only) 26.

Today, for example, the temperature reached 29 degrees with 60% air humidity in New Orleans. This is similar to current weather in Malaysia (32 degrees and 65% air humidty). It is clear that in Louisiana the outbreak is quicker than in Malaysia, probably because in the latter country they tried to find the origin on a case-by-case basis and then took drastic quarantine measures.

It’s still to early to draw conclusions from this, but it’s my impression that COVID-19 does follow the pattern of influenza virus in tropical areas. This would mean that the transmission rate should be higher in the tropics than in areas with high air humidity at more northern latitudes. I estimate that R0 (the amount of other people infected by 1 infected person) will be lower in areas that show a combination of high air humidity and low temperatures than areas that show a temperature between 4 and 11 degrees and low air humidity. Although further developments in Louisiana might disprove this.

Perhaps (and hopefully) we will see an R0 that will be lower than that of influenza virus. Only time will tell. This is especially true, because we aren’t yet in the phase where rainfall is at it’s highest in these tropical areas. In India, the monsoon season usually starts in April. If R0 is truly higher during these humid times, then India will be facing a difficult situation.

Looking at India, it’s also interesting to note whether there will be any differences in transmission rates when comparing the north-south divide. After all, India is a vast country that stretches from the 30th Latitude all the way to the 10th .

These 6 blogs form a coherent whole:

How great is the danger of the COVID-19 virus really?
The influence of humidity on the spread of the COVID-19 virus
What is happening in the (sub)tropical areas with the spread of COVID-19? (This blog)
How do we respond to the positive effect of a higher specific humidity?
What if the diffusion rate of COVID-19 has dropped to -near-zero?
The enormous economic and social consequences of this pandemic