Earlier, I noticed that the mortality number of the provinces of Naples and Rome combined is only 250, while in Lombardy (Bergamo), the current death toll has risen to 6300. This difference cannot only be explained the original outbreak starting in Lombardy.

Previously, I indicated that the weather (in particular, specific humidity) provides an explanation. You can read another blog explaining this on my website.

California had registered cases before the state of New York.

This is what the San Francisco Examiner wrote on the 27th of March:

The state of New York has only half the population of California. Still, New York now has around 1,000 virus-related deaths, while California “only” has 125. The lock down in California started only 10 days ago, so that can’t be the reason for this remarkable difference.

If we zoom in on the cities of New York and San Francisco, we see a pattern emerge that I also noticed in other places in the world.

Even though New York City has 11 times the number of inhabitants of San Francisco and the city of New York has suffered 800 deaths, San Francisco suffered only 5. If you look at the weather in both cities between February 4th and March 26th, we see the exact same situation as in Italy. In fact:

This is summarized in the graph below.

In order to make the transmission speed of the virus comparable, each graph starts on the day that in each 10 infections were detected for the first time.

In the upper half of the graph, we can see that New York had an average air humidity of 3,6g/kg and 45 “bad” days. That’s a little worse than conditions in Bergamo.

In the lower half of the graph, we see that both Napels and San Francisco had an average air humidity of 6,2g/kg and respectively 22 and 19 “bad” days.

If we look at the number of deaths per million since the 10th confirmed case, we see that the situation in New York strongly resembles that in Bergamo, while the San Francisco situation resembles the one in Napels. 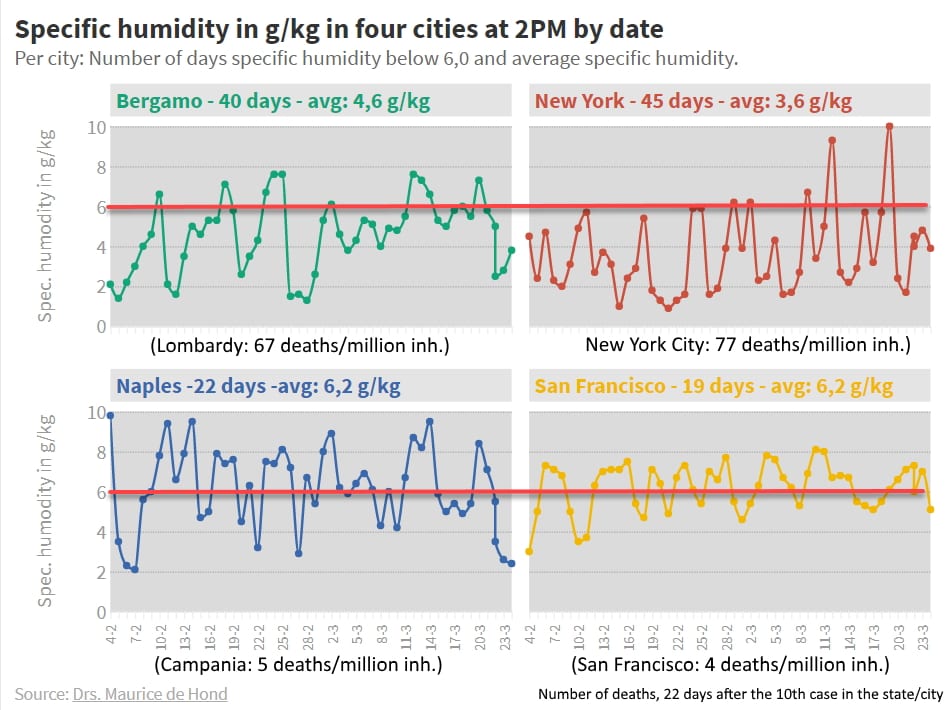 This is another strong indicator that specific air humidity has a high impact on the R0-value, the crucial value that measures the number of persons infected by 1 infected person. In northern Italy and New York, R0 seems to be roughly 2,2, while in Napels and San Francisco, it barely reaches above 1,0.

(This means that a lockdown in San Francisco and Napels might have been complete overkill compared to the actual danger).

If we expedite research aimed at further understanding how air humidity influences viral spread and try to accurately find a critical value of air humidity (perhaps 5,8g or 61g/kg), it might be possible to optimize both indoor and outdoor measures taken to combat the virus.