Blog - laatste nieuws
U bevindt zich hier: Home1 / COVID-19 english2 / When will the government come to its senses?

Since March 22nd I have written over 75 blogs about Covid-19.  It was always a combination of data analysis, logic and studying studies and articles. Some even more than 50 years old.

From that finding I also concluded that the approach to combat Covid-19 was not the right one. It caused far too much damage in all sorts of areas of society, plus it gave insufficient protection against infection.

My views were either ignored by many of the experts appearing in the Dutch media or rejected with qualifications at various levels. The most important criticism would be that I am not a physician/virologist or even scientist (which I am). In many media I was completely ignored. And if attention was paid, then almost only in columns with a disparaging approach.

On YouTube, videos with me were removed and/or made difficult to find through Google. The latter is still the case, by the way. On 14 May we posted an animation video on Facebook, in which we explained the great importance of aerosols and that the one and a half meter society was not the right answer.

If you wanted to watch that video,  you’ll see a remark from the factchecking department, that the information is wrong: Because you have to keep the 1,5 meter distance.

Somewhere at the bottom is still the possibility to watch the video, but it is hardly found. So immediately after this intervention, the number of views dropped sharply.

Given the knowledge we now have, this shows in a disconcerting way in what kind of world we have ended up. Orwell’s 1984 was still too optimistic: Covid-19.

Friday an article by Dr. Kevin Fenneley appeared in The Lancet. He is a specialist in lung diseases. He comes to similar conclusions as I do.

In this blog I suffice to report his most important finding and a printout of the first three “Key messages” from the article.

“A new paradigm of infectious aerosols:

These data show that human infectious aerosols exist in a wide range of particle sizes, which are remarkably consistent in studies, methods and pathogens.

There is no evidence to support the concept that most respiratory infections are associated with mainly large droplets. In fact, small particles/aerosols are the rule rather than the exception, contrary to current guidelines.

These small particles occur without a prolonged period of time to allow desiccation, and they are of a size that can be inhaled directly.

This information also adds evidence that the current dichotomous infection control system needs to be updated”.

And these are the first three main messages of this article according to the author. 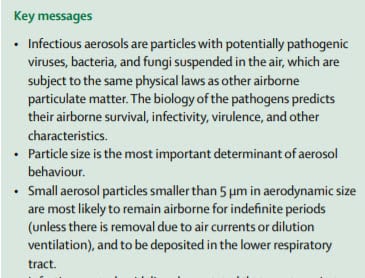 Finally, my most important conclusion from these 5 months:

The vast majority of Covid-19 infections occur through inhalation of the virus and not through larger droplets that end up in the nose, mouth or eyes of an uninfected person.

Isn’t it about time that responsible people in the administration of the Netherlands, in politics, in the media and in science, came to their senses and indicated that the hegemony of WHO/RIVM and OMT in our country should finally come to an end?

Who are mainly busy keeping people imprisoned by maintaining fear. Far too much damage has already been done. Part of it, I’m afraid, is irreparable. But nothing more can and must be done.