In my -firm- criticism of the RIVM (the Dutch CDC) and specific persons of those bodies, I am convinced that all those persons have always acted in good faith. However, I think that they should have been aware by now, that they regularly lag behind the facts and have a tendency, when new important knowledge is available, to stubbornly insist that their original points of view still applies. With disastrous consequences.

Yesterday evening Nieuwsuur (a Dutch news program(  started a three-part series about the drama that has taken place in care institutions and the harmful role of the RIVM in it.

Of all the Dutch mass media, Nieuwsuur is the only one, that regularly critically examines the roles of the government, RIVM, OMT and GGD. Yesterday’s episode was the provisional high point (or low point). We saw how the RIVM guidelines played an important role in the disasters that occurred in the months of March, April and May in healthcare institutions and in home care.

I am not even going to start formulating the errors of those guidelines. Take a look at that broadcast for yourself. But the most important thing, in fact, is that the German RIVM (RKI) and Labor Inspectorate already came up with the advice in March that we would now describe as adequate. But the Dutch RIVM came up with bad advice, which made many elderly people and care workers unnecessarily ill. And I don’t even dare to estimate how many extra deaths that has cost.

But I realized at the end of March that there were major risks in the care institutions. I came to that conclusion from the aspects “aerosols”, “humidity” and “ventilation”, as I described  in earlier blogs.  And behind the scenes I tried – for pity’s sake – to get attention for this from politicians in The Hague.

But the decision-makers in The Hague have completely surrendered themselves to the RIVM and actually still seem to do so. Especially someone like Hugo de Jonge. With disastrous consequences not only in health care, but also in other areas (such as a collapsing economy, a society that is unnecessarily hampered in many respects, and public health).

I won’t elaborate on it in this blog. I already did it in previous postings. I will briefly mention the following points:

First, not wanting to acknowledge the importance of aerosols, and now arguing that they do play a role, but only to a limited extent. (A good example of this is Prof. Wallinga, who last Monday in the AD, literally said “I’m not an expert when it comes to face masks, but I do know that we keep 1.5 meters distance. If you do that, the added value of a mouth cap is not there”.  A text that is identical to that of Prof. Van Dissel in one of his last interviews so far).

Already in March there were movements in Western Europe to promote that everyone would wear mouth protection in places with a lot of people, as they did by default in East Asia. In the Czech Republic they did so as early as mid-March. But the WHO continued to say that oral protection does not provide any additional benefit. And time and again when Prof. Van Dissel was questioned about this, as in the sessions in the Lower House, he said it only delivered false safety.  A mantra that was then repeated to annoyance by all members of the cabinet and mayors.

In April/May, mouth protection was introduced in several places, but it was not until the beginning of June that the WHO changed its mind, and since then the WHO has also recommended wearing mouth protection in public places (i.e. in indoor spaces where foreigners are not allowed to wear mouth protection).

The great importance of aerosols

The prominent role of aerosols in the spread of the virus is becoming increasingly clear. I belong to the – fortunately ever-growing – group, which states that aerosols are the dominant means of spreading the virus. Prof. Jimenez from Colorado has made this overview. And he’s worked it out in detail in this document. 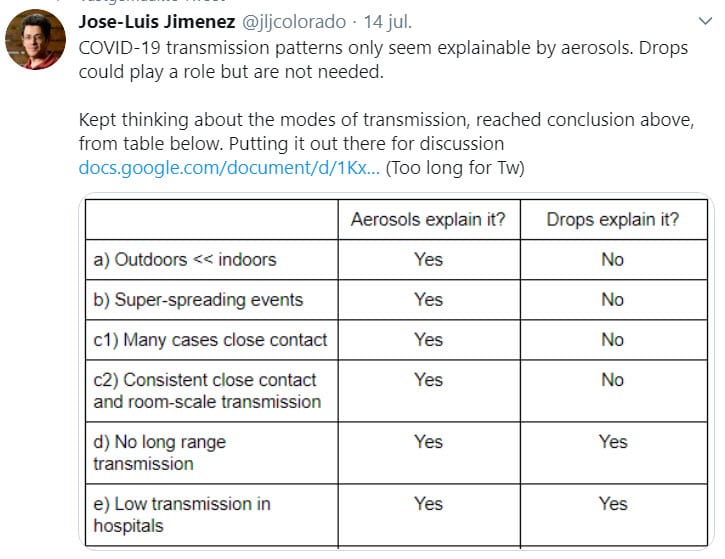 But there too we see the pattern that the WHO and the RIVM must be pulled along like stubborn donkeys in order to eventually recognize this important element in the spread of the virus and to take the right measures.

It is also important to realize that the massacre at health care institutions was partly caused by the aerosols that were able to float unhindered in those institutions. And I have heard the distressing stories about this from staff members of those institutions. They also pointed out at an early stage that the internal HVAC system did not work adequately and therefore contributed to the spread of the virus throughout the healthcare institution.

Not only are the measures taken far from adequate to combat the virus worldwide, but they are also far too disproportional. As a result, much avoidable damage is caused to the economy, society and public health.

If the virus only spreads indoors, then all the restrictions you impose on people outdoors are harmful. Because there too – completely unnecessarily – you have to adhere to the 1.5 meter distance rule. With a policy on terrace seating that we didn’t even apply in the past when you wanted to visit someone in hospital. With restrictions for people who want to relax or be active outside. And with the risk of getting fines and a criminal record.

But that also applies to the dangers you do and don’t run when you are somewhere indoors with other people. In some places and at some moments you really run a high risk of being infected. But in many places at many times you don’t have that.

If you only proclaim generic measures (keep 1.5 meters everywhere and wear mouth protection in public transport) then you will also cause great unnecessary damage there.

Precisely for this reason, I made an overview that allows you to determine much more specifically when you need to do something in order not to become infected and not to infect others. Fortunately, it has already been viewed by many people.

What is crucial is that you make the approach proportional. At the beginning of April I expressed my support for mouth protection. It prevents people from infecting others in places with a lot of people you do not know. And if – just like in East Asia – face masks had been made compulsory in indoor spaces in Western Europe and New York at an early stage, there would have been far fewer victims and the economy would have been far less disrupted.

But I have also indicated that if very few people are infected in an area, it is unnecessary to wear that mouth protection. I had made this as an aid. 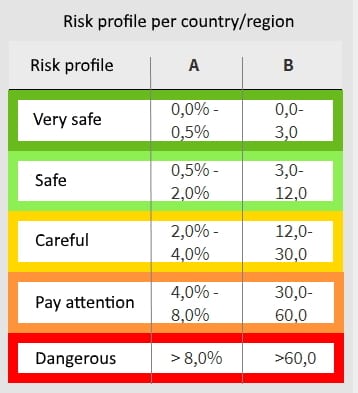 As long as we are in the green zones, the advantages of mouth protection in those confined spaces do not outweigh the disadvantages. But outside those green zones, I think it is very desirable to wear it in places where there is indeed risk.

However, that risk can be eliminated in indoor areas by good ventilation, the right humidity or an HVAC system that is truly corona-proof.  In those cases, there is no risk in those indoor areas and mouth protection is unnecessary. That is also what I have described here. Plus that people in risk groups can decide for themselves whether or not they want to run certain risks.

This allows us to find the right balance between combating the virus and maintaining our society ourselves. So that we are no longer at the mercy of people from the WHO/RIVM/OMT who’s policies are way behind when it comes to combating the virus. There are even countries where people are obliged to wear mouth protection outside.

I fear that the Netherlands is also pre-sorting to work in confined spaces with mandatory mouth protection, as has now happened in Belgium and France.  Whereas two weeks ago almost 10,000 tests were carried out per day and an average of 60 people were infected per day, in the past week the number of tests has averaged almost 11,000 per day and the average per day has risen from 58 to 68.  An increase of 10 per day, half of which was due to more testing. But even when we have 200 a day with so many tests conducted, that is not something be afraid for.

Yet I already heard Prof. Voss in Tijs van den Brink’s DIDD worrying about this “rise”. You can bet that all our usual suspects will proclaim on TV that the second wave is coming at the next local outbreak, perhaps because a cluster is popping up somewhere in the Netherlands, perhaps again in a meat processing company. If we get a further increase of maybe 50 or 100 per day, I’m pretty sure that we have to wear mandatory mouth protection in all public areas.

Something that’s a complete overkill with such low numbers of infected people.

I’m annoyed every day by the fact that we’re not preparing for the real danger in the fall. That if we then have closed spaces where there is no proper ventilation and the HVAC system is not corona-proof, we will have major outbreaks there. With many drastic measures as a result.  Wearing mouth protection will not be the only thing we will have to do in those areas, but we will undoubtedly get even tougher measures, which will throw back both the population and the economy.

But as long as WHO/RIVM downplay the great importance of aerosols in the spread of the virus, virtually nothing will happen in that respect.  And Nieuwsuur can prepare it’s next critical series on the Government and RIVM in the autumn. But that will again be too late.

When will politicians like Hugo de Jonge free themselves from the dictates of the RIVM and OMT and show that they can make a good assessment of what our society needs? And when do they really anticipate on what is coming to us instead of slowly chasing after the facts with dramatic consequences, as has happened in healthcare?

And what these consequences will be for the economy and society will only become visible in the autumn.