The superspread event on March 5th in Kessel

The municipality of Peel en Maas is the municipality with the most hospitalizations in the Netherlands. TV newscast EenVandaag devoted a report to it on 19 March. A meeting on 5 March in community center De Poart in Kessel was the superspread event for the outbreak there. The available data give a good impression of …

The superspread event on March 5th in Kessel Lees verder »

The municipality of Peel en Maas is the municipality with the most hospitalizations in the Netherlands. TV newscast EenVandaag devoted a report to it on 19 March.

A meeting on 5 March in community center De Poart in Kessel was the superspread event for the outbreak there. The available data give a good impression of the impact of that event. It was a meeting to raise money for the muscular disease of a fellow villager.  This is the report that broadcaster P&M made of it. Here we see a picture of another meeting in that community center, which gives an impression of what it looks like inside.

And this is a photo taken at the actual event. 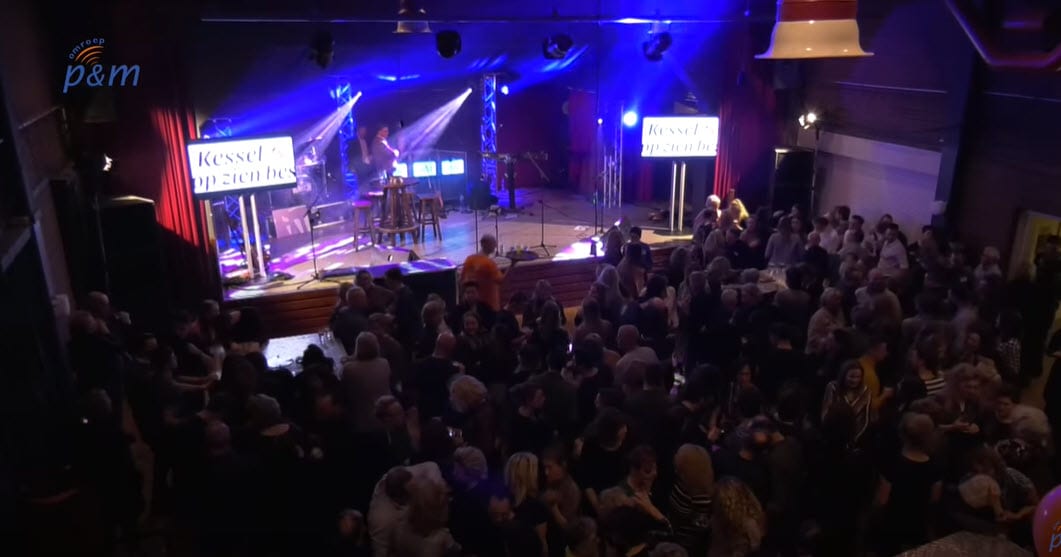 It’s not really a large venue. There would have been 500 people present, most of them from Kessel. A village with 4,000 inhabitants in the municipality of Peel en Maas. From the video it is clear that people of all ages were present. Through the weather information for that evening we have determined that the specific humidity was 5.8 g/kg.

In this blog I will have to make several assumptions, because the specific numbers for the village of Kessel are not known. Plus we also know that the number of deaths and infections in the Netherlands are underestimated. But there is a very important reason why I do the following.

First I show the estimated figures, to give an impression and then I come to an important conclusion.

In the meantime, this number has risen to 550 with the note that because relatively few tests are carried out in the Netherlands, the actual number of infections can be a factor of 15 to 20 times higher. This could therefore mean that the percentage of infected people in this municipality is 8 to 11%.

Since then, the number of victims in that municipality has only increased. And that’s interesting because Peel & Maas seemed to be on its way to reap the benefits of the group immunity strategy initially propagated by Dutch Prime Minister Rutte.

Since April 1st, the RIVM only displays the number of hospital admissions per municipality. And these are the figures for Peel and Maas. At the beginning of the month the number was around 220, and on April 19th, 310 per 100,000 inhabitants.

With all this information, it is now possible to give a picture of the result of this super spread event.

There were several hundreds present. It can be assumed, that there were people present who were infected during Carnival 2 weeks earlier, without realizing that they were infected.

10 days after the event in Kessel, the municipality had 30 “officially” infected people. However, taking into account the underestimation of the infected cases, I estimate that at that time around 300 people in the municipality were already infected. That would mean that 75% or more of those present had become infected that evening.

According to the regular course of the spread, each infected person may have infected another person after about 7 days. So even without a super spread effect, 50% of the inhabitants of Kessel could already be infected by the end of March. It is also interesting whether church services were held between 5 and 20 March and whether they also led to additional infections. After 23 March the rate of the infections decreased considerably due to the announced measures.

Considering the given numbers, the number of Corona deceased in Kessel seems to have been somewhere between 40 and 60. (The pastor mentioned in the report of EenVandaag the number of 30, but I don’t know if any people died in Kessel who were not buried at the church.) It is also well possible that there are still people in Kessel who are very sick and may still die.

I estimate that at the super spread event on March 5th in Kessel about 50 to 75% of the people present were infected with the virus. And that in the following weeks between 40% and 60% of the municipality was infected. (That would be 1,600 to 2,400 people). This now leads to 40 to 60 deaths. 10% of the inhabitants of Kessel are over 75 years of age. The mortality risk of infected elderly people is significantly higher than that of people under that age. (75% of all deceased people in the Netherlands are over 75 years of age!). It seems not unlikely to me that a similar pattern is visible in Kessel.

This gives a good impression of the enormous effect of the super spread event on 5 March in Kessel, even if the actual figures would be a bit lower.

Last but not least: Precisely because the number of infections and casualties in Kessel has been so high and it is also certain that there was a super spread event, I would urge the RIVM and the Ministry of Health, Welfare and Sport to start an investigation in the municipality.

I would like to know of all the victims (dead and infected) whether they have been at that meeting on 5 March and, if not, whether someone from their families has been there. In addition, I would carry out a random sample survey of approximately 500 people in Kessel to determine how many people were found to be infected.

I would also take a questionnaire to establish whether they had any complaints and if so, which ones and for how long. Whether they have been at that meeting on 5 March, or whether they had had contact with people who had been there. Did they visit church between 5 and 20 March? Plus I’d like to find out when the complaints started and when they ended.

Doing so will provide a wealth of information about all the facets of the spread of this virus and also what is actually the maximum percentage of people that can be infected.

I would say, do it as soon as possible.