Yes! We know what increases the spreading speed: micro drops.

A number of times already have I experienced the great power of the internet and its users when it comes to complementing your own vision with their specific knowledge. The information I received in the past two days does not only support the proof of my own research conclusions, it also answers any remaining questions. …

A number of times already have I experienced the great power of the internet and its users when it comes to complementing your own vision with their specific knowledge.

The information I received in the past two days does not only support the proof of my own research conclusions, it also answers any remaining questions. Yesterday, a video of a Japanese experiment, a South-Korean doctor and additional scientific research gave me a true ‘Eureka’ moment!

From the above, it’s clear that the spreading pace, also known as R0, is higher for a low specific humidity than for a humidity above 6 g/kg.

But then we wonder: why is that? The answer to this question can help us tremendously in forming the best policy and taking the most suitable measures. Fortunately, the answer is coming closer and closer as we gain new information.

The WHO states that a social distance of 1,5 meter is safe enough. People cannot, according to the WHO, infect each other directly outside this range. (They can do so indirectly, but that’s not relevant for this blog).

Yesterday I wrote about the LA-Times article that covered the gathering of 60 choir members in a church building near Seattle on the 10th of March. They held their distance and did not touch each other. None showed symptoms. Still, after 3 weeks 45 out of 60 were infected, and 2 of the older members have passed away by now.

How could this happen? 1,5 meters should be a safe distance, right? My newly acquired information answers these questions and forms the missing link in my investigation. It’s a Japanese experiment, explained on video by the chairman of the Japanese organization for infectious diseases, Prof. Kazuhiro Tateda.

His experiment explains in a very convincing manner why so many of the choir members fell ill. I will summarize his conclusions by using a picture and a description.

With the use of a highspeed camera researchers have shown what happens when we talk or sneeze. Apart from bigger drops, which do indeed not cross the 1-1,5 meter mark, there are still plenty of smaller elements coming out of us, which are called micro droplets. These can float in the air for a long time. As shown in the video, this is the situation after 20 minutes in a locked off room. 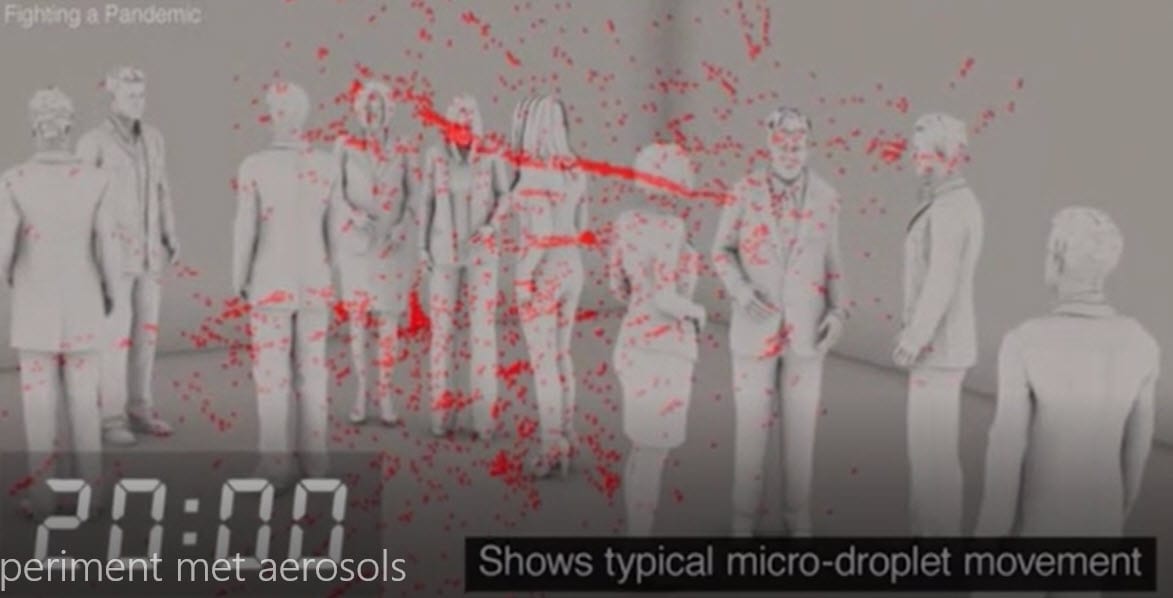 Another specialist from South-Korea mentions these micro-droplets (aerosols). Watch this video from 11:30. He describes a religious gathering in South-Korea in a space holding many infected people. Between the 17th and 24th of February, in the French city of Mulhouse, there was another religious gathering with 2,500 visitors. This gathering too seems to have been a big contributor to the outbreak in France. And there are many more clues like that, including in Italy and the Netherlands, indicating that church meetings have been a major source of infection.

This phenomenon is mentioned in many other places. I found these tweets on the subject to be very interesting and relevant. While the WHO basically ignores the importance of these micro-droplets, both these experiments and what happened to the Seattle-choir greatly undermine that stance.

The Japanese video covers the (huge) indoor spread of those micro droplets, that seem to disappear easily by proper ventilation.

All this information combined slowly completes the puzzle.

An American experiment from 2013 shows that high humidity greatly diminishes the spread of these micro-droplets (aerosols). Their conclusion:

Here they describe that their experiment showed how the spread of these aerosols slowed down in air with high humidity. Now the proof seems to be almost complete.

Regarding the possibility of indoor spreading (in shops, hospitals, offices and church) we can hence conclude that the aerosols of one infected person, can cause for infection of many others. Even when those others are at a ‘safe’ distance of 1,5 meters (or more). This explains a big increase of the R0 (the speed with which the virus spreads).

In spaces with a high specific humidity and/or good ventilation we see that infection by aerosols is (almost) 0, thus moving the R0 from my example to be much closer to 1,0. If we then continue to keep our 1,5 meters of distance, that R0 will be brought even further down to the preferred value of well below 1,0.

We don’t know, though, what happens to these micro-droplets in the open air. I’m under the impression that they can be important outdoors too, but not as much as indoors. And if the humidity is high, the effect outdoors will consequently be (even?) smaller.

That pretty much concludes the story.

These findings should have immediate consequences for policy makers:

Plus, -and I keep emphasizing this- let’s start as quickly as possible with scientific research that confirms (or not) what I concluded above.

Since the entire northern hemisphere faces better weather conditions, it could mean that we could relax our measures. This would have many positive effects on all aspects of our society. You should realize though, that, since the daily death count is “delayed” by 14 days (today’s count is the result of the policy and weather 2 weeks ago) we should not wait to reduce our measures for another two weeks. This would cause unnecessary costs and discomfort.

Now of course we should not take unnecessary risks that will infect more people. However, we should neither take measures that barely serve a cause whilst at the same time bring forth a lot of damage. Protecting society could be done much more intelligently than what we currently see.

(The lockdowns in India and South-Africa, but also the one in California, can be categorized as overreacting as they see small net benefits and big losses. After all, they have “favorable” weather. In the coming 10 days New York will show Bergamo-like scenarios (or worse), partly due to the local weather of the past month. Now that the weather improves, increasing measures will have very little effect on the spreading of the virus. It will only cause more economic damage and grief.

For now, the WHO (and the Dutch RIVM) should face what more and more people worldwide are realizing. The experience of that church in Seattle should be enough for them to revise their current position immediately.