Blog - laatste nieuws
U bevindt zich hier: Home1 / COVID-19 english2 / What do the numbers say. Are we doing well or not?

In the past few days we heard in the various talk shows on TV, that the R0 (reproduction factor) is on the rise again towards 1. That gives you the feeling that “we” are going in the wrong direction again, despite all the strict measures,.

But if you delve a bit deeper into the actual data, you see on the one hand how shaky that observation is, and on the other hand, that this increase, if it really would be there, doesn’t mean much at the moment.

So let’s look at the figures in the right perspective. 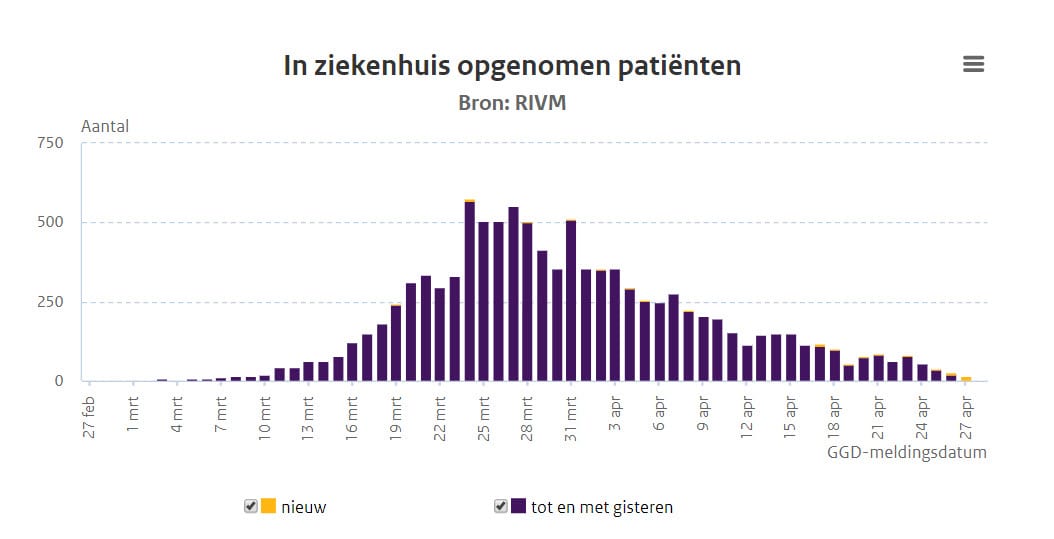 Because there are clear problems with both figures. It can go up or down without actually doing so.

Suppose, for example, that more and more people do not want to go to hospital with Corona complaints. That could explain the stronger decrease in the number of hospitalizations. Or the other way around.

With regard to the mortality rate, we already know for sure, that something important has happened.  Statistics Netherlands calculated that more than twice as many people have died from Corona than the RIVM has registered. Similar differences can be seen in many countries (This is an overview from the New York Times).

Since April 10th, people have been trying to do their best to better register the correct number of Corona deaths. Maybe this will increase the number of deaths a bit. But in short: the development of the death rate is not an undisputed number either. So there are still some uncertainties in the hardness of the figures themselves.

But even if the R0 would have really risen back to around 1, that would mean that we at worst would end up in a situation, where the number of newly infected people would remain stable and would therefore by no means create a situation with strong growth again. That risk will probably only arise again in the autumn.

Finally. On average people spend 3 weeks in an ICU.  Three weeks ago about 70 persons a day were placed in Dutch ICUs.  These people will now flow out on average per day. The influx at this moment is around 20.

Based on this, it can be assumed that the decrease of patients in ICU’s per day will be 40 to 50 per day in the coming days. So on May 1, 2, or 3, we will drop to a figure of less than 700 persons in our ICU’s. And in three weeks that number will be close to 500 if the number of new ICU admissions stays below 20 per day.

Even if the R0 will be around 1 again in the whole of the Netherlands, there will be no significant increase in the number of people in the ICU’s, at least until the autumn.  Not even if we expand the measures considerably.

It wouldn’t surprise me if in the next 2 months, the number of patients in the ICU’s will still be well below 500.

When are we going to start working on that other important patient who is also in serious condition in the ICU: the Dutch economy and society? The situation has only got worse in the last three weeks.